Brian Ward, Deputy Director of the MUHC Research Institute, emphasizes the need to create relationships of trust to sustain a healthy and mutually beneficial global health research environment. —Report from a presentation at the 2012 conference of the MUHC-ISAI

A memo from the Reich Office in Munich dated 1873 states: “It is not a matter of indifference if, in a city, the dwellings of the poor become infested with typhoid and cholera but it is a threat to the health of the richest people also.”

Today, the social and psychological distance between the richest people in the world and the poorest people in the world is actually less than the distance between the rich and poor in Munich in 1873. You can get from the poorest part of the globe to Montreal in under a day and a half. Canada accepts about a quarter of a million individual immigrants per year and, in just the month of June 2012, 800,000 Canadians travelled overseas and 26,000 Chinese citizens visited Canada. The 2006 census records that 3.4 million Ontarians are foreign-born; in Central Montreal, over 60% of residents are foreign-born.

Health in the global village

In 2001, the Tropical Diseases Centre at McGill started to get calls from doctors in St. Hyacinthe, Chicoutimi and Rimouski who were confronting cases of malaria for the very first time. Dr. Dick Maclean, for whom the Tropical Disease Centre is named, looked at the reported cases carefully and found a massive peak of falciparum malaria, the most dangerous kind, that was associated with the arrival of some 20,000 refugees from Tanzanian refugee camps. He then looked back at other curious peaks in 1987 and 1988, of between 1,000 and 2,000 vivax malaria cases in Canada. He examined data from the U.K. and U.S. for those years and saw similar spikes in vivax malaria cases at precisely the same time. When he obtained Indian data, he found a major vivax malaria outbreak in the Indian provinces of Punjab and Haryana. As can be seen in Figure 1, an outbreak of malaria in India caused the largest spike of malaria ever seen in Canada. 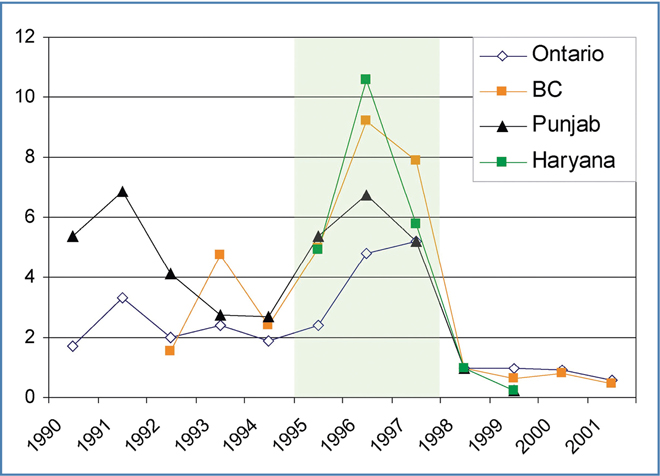 There is no “us” and “them” anymore. Research into diseases like malaria is needed for the health of our own population in Canada as much as for people who live in endemic areas.

The globalization of research priorities

The first priority in global research is to implement the measures we already know will make a difference, and there is a huge backlog: clean water, food, sanitation, mother-child health, maternal education, vaccines, bed nets, antibiotics, vitamin A. We need research on how to deliver these things that will dramatically improve health in resource-poor countries and in the disadvantaged segments of richer countries.

The second priority is to reduce the things we know do harm: smoking, pollution, cheap calories, obesity, diabetes, hypertension, etc. Despite some preconceptions to the contrary, these are not just problems of the richer world but are truly global problems. The record holder for obesity in 2010 was Argentina, with Mexico not far behind and the U.S. coming in third. And each country faces the downstream problems resulting from obesity, such as hypertension, diabetes, joint replacements, etc. These are now global problems.

The third priority is to pursue new areas of discovery. The “omics” are giving us insight we never thought we would have into disease processes. Again, we need research at all levels in all societies, and we need to apply the brightest minds to these discovery challenges and collaborate with people who have ideas around the world.

Research institutes such as the RI-MUHC conduct basic research, animal studies, trials in human beings, trials in populations and analyses of massive data sets. Research is a continuum of ideas from discovery all the way through to application and evaluation. The Romans invented cement, which had little impact until it was translated into such things as aqueducts. But the Nobel Prize would have gone to the inventor of the cement, not the builders of the aqueduct. We are pushed very strongly towards applied science, but must never forget that this requires a pipeline of discoveries provided by our basic scientists.

The dichotomy between pure and applied sciences is false and needs to be abolished. All research across this entire spectrum is equally valuable because much as we need discoveries, they are of little value until they are applied.

As just one example, basic research into the microbiome of the gut may help to solve problems of both the overweight and underweight. Hospital-based researchers and microbiologists are looking at how the gut participates actively in extracting caloric content from food. Research has shown that a mouse with a particular type of colonic flora extracts up to 30% more calories that a mouse with a different kind of flora. That discovery may provide an answer to both under-nutrition and obesity. The first human clinical trials of stool transplant for obesity are now underway in a number of countries. Basic discoveries in the healthcare research environment can lead to novel solutions that might address some of these very important global problems.

McGill is already a global university, with graduate students from more than 150 countries: 30% to 50% of McGill graduate students, doctoral students, post-docs and clinical fellows are from overseas. The RI-MUHC is the largest research institute in Québec by far, with a large annual budget, 350 labs devoted to fundamental and clinical research, lots of clinical researchers and 306 principal investigators. The future at the new hospital site looks bright. However, the research we need today is produced not within the confines of a single institute, but through collaborations that are global in scope (Figure 2). 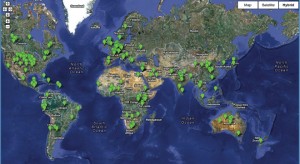 National, philanthropic and even military institutes have established paradigms for collaboration that have both encouraged and rewarded developing-world scientists for participating in all levels of healthcare research. And research collaborations are expanding quickly, for many different reasons.

In the preliminary AIDS Vaccine Evaluation, the U.S. and other countries paid to have vaccine evaluation sites set up and certified in countries that were low-income settings, where transmission rates of HIV were high. They did not do this necessarily out of the goodness of their hearts, but because antiretrovirals so effectively control HIV progression in rich countries that it had become impossible to study a vaccine for HIV in a wealthy country unless it was a therapeutic vaccine. Researchers currently have no choice but to study HIV candidate vaccines in countries where there is still active transmission.

However, we need to safeguard confidence and trust that research collaborations will benefit all parties. There are some very good and very bad examples of global collaboration and an urgent need to get better at it.

The pivotal studies that proved the effectiveness of the hepatitis B vaccine were conducted in Haiti in the early 1980s, but only 30 years later did Haiti have access to a universal hepatitis B vaccination program. It is this colonial research attitude that has, much more recently, led the Indonesian government to refuse to release its viruses, which are best suited for making a vaccine against H5NI, the avian highly pathogenic influenza virus we are very worried about. A researcher trying to leave Indonesia with a virus can now be arrested and put in jail. The historical attitude of colonial science that essentially robs the developing world of its intellectual property has led places like Zimbabwe and now Egypt to make it extremely difficult to collect samples of any organic material for research. We need to address these issues and restore confidence.

The national and international networks that emerge from even a single lab at the RI-MUHC can be extensive. Figure 3 shows the countries in which my lab and that of Dr. Momar Ndao — who came as a post-doc from Senegal — have collaborated in the past 20 years. The red lines are trainees who have come from these countries. This is not enough. Canadian universities need to attract foreign students and trainees at all levels, and not just for their fees but for their brains, their energy and their passion. Foreign-born graduate students come in with a mission and many of them go back home afterwards, which helps all of us. We need to reinstate the waiver of “overseas” tuition fees that McGill cancelled a few years ago and should consider putting some of our development money towards supporting foreign students in their studies here and in maintaining partnerships when they return home.

Canada’s immigration policy specifically targets highly trained foreign-born individuals, and granted, many of them want to come to Canada. However, this program needs to be paired with ones that provide support for individuals who want to go back and continue their research in their home countries. Each one of these individuals is a small business and supporting them would provide an important counter-balance to our otherwise predatory immigration approach.

Finally, we need to develop, promote, fund and study overseas experiences and work for Canadian-born students. Most of what we do today is little more than poverty tourism. We need to rethink our entire approach and encourage our graduate students, post-docs and faculty (physicians, pharmacists, nurses, etc.) to commit to long-term partnerships. Lasting, respectful and deep collaborations are the key to tackling the research priorities that will help us address the health challenges we share as a global village.