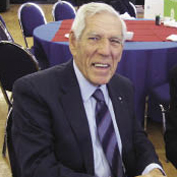 Between 1966 and 1970, the Honourable Claude Castonguay headed the Commission d’enquête sur la santé et le bien-être social, which developed the blueprint for Québec’s health and social welfare system. Upon election to the Québec National Assembly in 1970, Mr. Castonguay became Québec’s Minister of Health and Social Affairs, and assumed responsibility for putting the new system into effect. From 1995 to 1996, he served as President of the Committee of Experts on Drug Insurance. Mr. Castonguay was named Companion of the Order of Canada in 1974 and Officier de l’Ordre national du Québec in 1991. He served as a member of the Canadian Senate from 1990 to 1992. Most recently, he chaired the working group on healthcare financing in Québec (2008) and the implementation committee at the Institut national d’excellence en santé et services sociaux (INESSS).