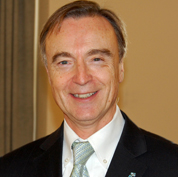 Dr. Fabrice Brunet  chairs the Conference of Québec AHSC’s Director Generals. He is Professor in the Department of Pediatrics at the Université de Montréal and Vice-President of the Université de Montréal health network (RUIS). Among his many accomplishments are the construc-tion of a clinical research centre and cardiac surgery centre in Paris, a hospital project in Saint Petersburg, and the creation of a resuscitation and intensive care unit in Toronto. At Sainte-Justine, he has overseen a number of modernization projects, includ-ing the construction of a new research centre and a building for specialized care units. Until his arrival at Sainte-Justine, he was Director of the Department of Resuscitation and Intensive Care at St. Michael’s Hospital in Toronto, and Medical Director of its telemedicine program.