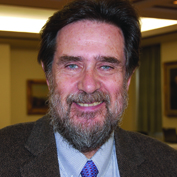 Sholom Glouberman, PhD, is Philosopher in Residence at Baycrest, and President of Patients Canada, an organization he founded in 2007 (initially called the Patients’ Association of Canada) that now reaches more than 10,000 patients and providers. He holds a PhD from Cornell University and has been an adjunct professor at Toronto, McGill and York Universities. His started in health care by being a family caregiver for his dying father in Montreal. He participated in the first multi-scenario strategic planning exercise for Ottawa-Carleton. He was the planner for the Centenary Wing of the Royal Victoria Hospital in Montreal. For almost six years he was a Fellow of the King’s Fund in England. He returned to Canada to take up his role at Baycrest and lead training programs in patient-centred care at Sunnybrook. He led research on health policy for the Canadian Policy Research Networks and directed a Masters Program in health management at McGill University. He has been a health system adviser in Canada and the UK. In 2005, Dr. Glouberman underwent major surgery, became a patient and wrote My Operation, a graphic example of the disparity between patients’ experience and institutional concerns.