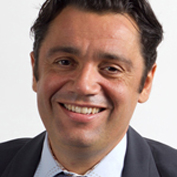 Co-director, Office of Collaboration and Patient Partnership, Faculty of Medicine, University of Montreal

Vincent Dumez, MSc, holds a finance degree and a Master’s degree in Management Science from Montreal’s international business school, Hautes Études Commerciales (HEC). Until 2010, he was an associate in one of Montreal’s most influential consulting firms, specializing in organizational design. Mr. Dumez worked for 13 years as a strategic consultant for large enterprises undergoing transformations.

Living with three chronic diseases for more than three decades, and thus a significant user of healthcare services, Mr. Dumez has been actively involved in developing the concept of “Patient Partnership.” He first explored the concept in his Masters’ dissertation, entitled Quebec’s tainted blood scandal or the failure of the doctor-patient relationship. Since then he has pursued the development of patient partners by training patients with chronic diseases, working on the boards of various community organizations and speaking in workshops and conferences addressed to healthcare professionals.

In October 2010, Mr. Dumez became the first director of new Office of Patient Partner Expertise of the University of Montreal’s Faculty of Medicine. In the summer of 2013, this office and the Faculty of Medicine’s collaboration program officially fused, consolidating the close relationship they had developed since 2010. Mr. Dumez now co-directs the new Office of Collaboration and Patient Partnership with Dr. Paule Lebel.