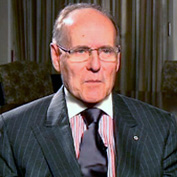 Member of the Board and Chair, Quality and Risk Management Committee, MUHC, and Chairman of the Board, Institut d’évaluation en santé de l’université de Montréal

Mr. Claude E. Forget, BA, LLL, MSc, OC, has had a long and varied career that has unfolded along three axes: policy analysis, health services development, ICT and financial services business development. He has worked on many significant Commissions of Enquiry, including Taxation (Carter), Medicare (Castonguay), Canada’s economic prospects (McDonald), Unemployment Insurance (Forget) and also with think tanks (IRPP and C.D.Howe). He presented briefs, and served as a consultant to both the Romanow Commission and the Kirby Senate Committee. Following his involvement as financial consultant to the Quebec Commission on Health and Social services, Mr. Forget assumed major responsibilities for the implementation of Medicare in Quebec first as senior civil servant and then as minister. He played a leading role in developing the financial control system still in place, the setting up of the first regional structures in the health care field, negotiating the first agreement with medical doctors, setting up the Quebec Medical Research Council and introducing innovative services and legislation with regard to youth protection services, the handicapped, adoption, pharmacare for the aged etc. His involvement in the health care field was continued after leaving politics with a ten-year board membership of the first organization in Canada dealing with medical technology assessment. As chairman of the board of the Royal Victoria Hospital he led a successful initiative to voluntary merge five McGill University-affiliated teaching hospitals into the McGill University Health Center. From 1989 onwards, Mr. Forget left private consulting for a direct involvement in business. He was made an Officer of the Order of Canada in 1991.